December 31, 2015
It’s that time of year where I get to write my annual blog post summary. This will be my third Year in Review post I’ve published on BecBoop and they are my all-time favourite blog posts to read; both on other blogs and also here on my own when I need a little pick me up during the year. It’s fun to see how far we come each year and this has been my most enjoyable year on BecBoop to date, without a doubt. My 2013 year to date was pretty cute & innocent (read that here) and last year’s one was super emotional (read that here) but 2015 is a happy happy year in review filled with gratefulness and excitement. 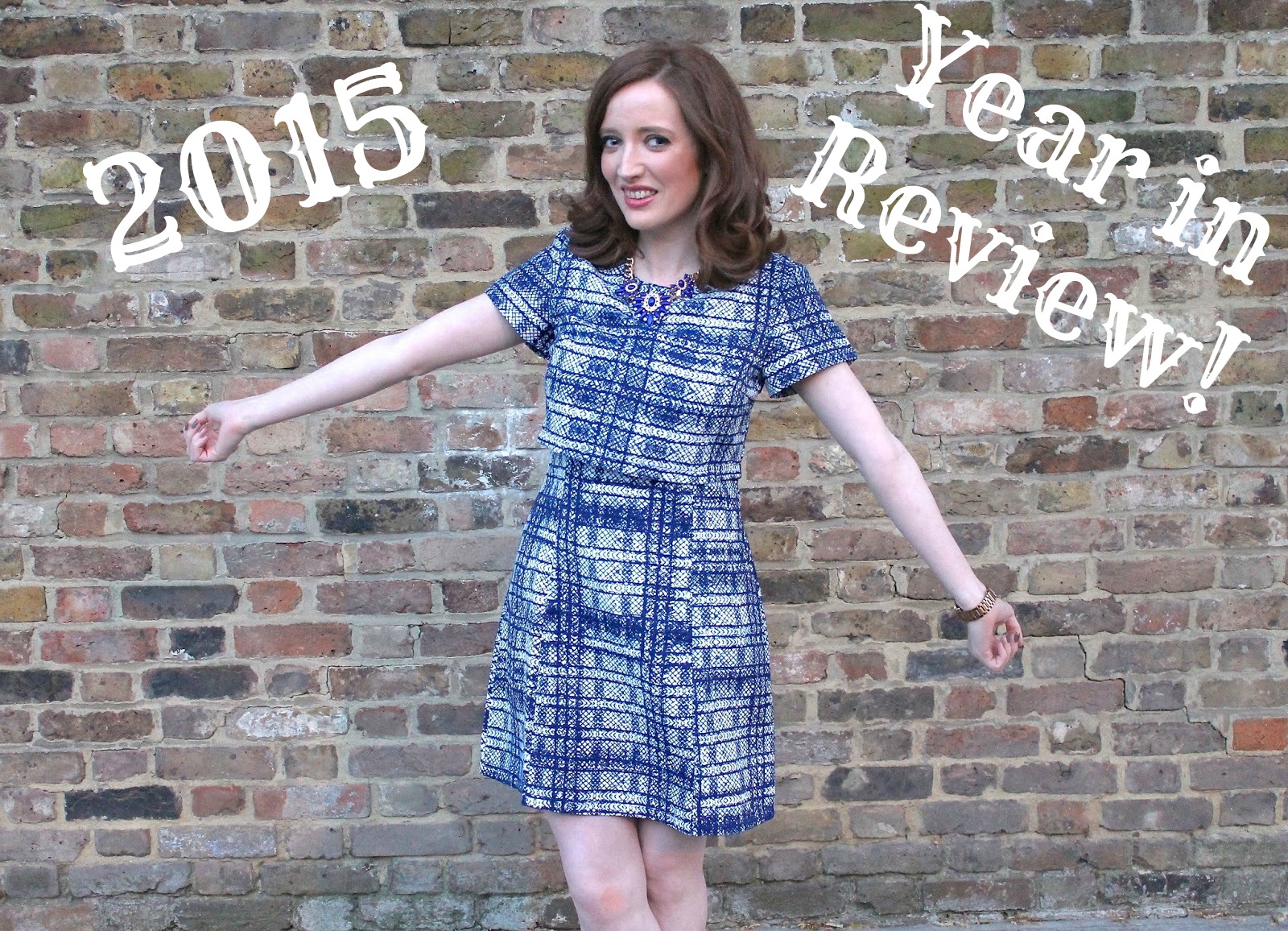 Blog
BecBoop began a new and exciting journey this year when I made the move to London in February. This, I feel has opened up my blog network to a whole new range of exciting contacts – bloggers and brands who I have had the pleasure of meeting and working with this year while still maintaining my Irish network. I began blogging on a daily basis for most of this year and dabbled in a bit of YouTube for a while before finding my place in the live-streaming world via Periscope, more on that below. I summarised my fashion year in review in this separate blog post the highlight of which was definitely attending London Fashion Week for the first time and covering the SS16 collections here and on Periscope. I really enjoyed creating lots of beauty content here on the blog this year and finalising my beauty post ‘theme’ which I think you guys like. I was also invited to review some amazing salons here in London and also at home in Ireland which was so much fun!
Throughout the year I published a range of fashion, beauty and lifestyle posts incorporating also some travel posts and event coverage. I also wrote a letter of advice to my younger self and a pretty personal post about the reality of being a ginger. I was thrilled to work with the Teenage Cancer Trust and help raise funds for their Boxathon campaign. I also took my hand to upcycling when I was asked to take part in a campaign with Gumtree. So it’s been an adventure!
In April I won my first blogging award for Best Blog 2015 at the Online Marketing in Galway Awards. To me, being recognised as a leading blogger in my home town meant so much and it was truly an honour. I was also featured in lots of national and local press for various interviews relating to style, fashion and beauty, see more on my Press page. 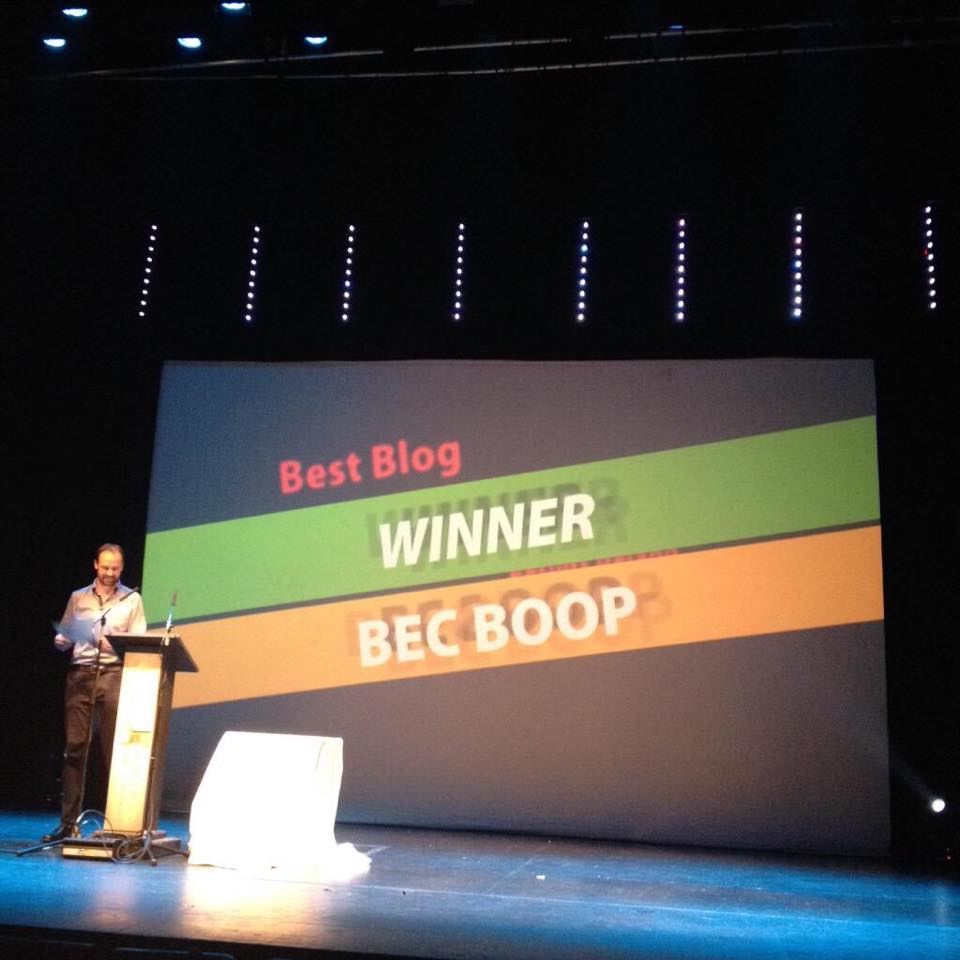 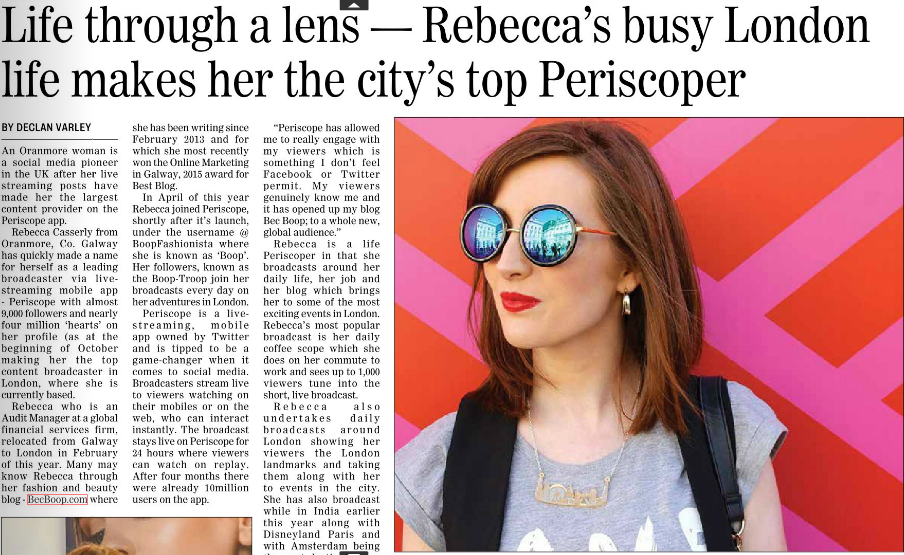 This year I refocused my social media strategy. As mentioned above, while I love creating videos on YouTube when I started live-streaming on Periscope I just didn’t have the time to do both. I decided which social media sites best complement my blog and ended up focusing less on facebook (like my page here) and more on twitter which makes sense since I enjoy tweeting and scrolling on my twitter timeline a lot! I exit 2015 with over 5,300 twitter followers *yay* and you can follow me here @BoopFashionista. Instagram is a site I am trying to develop more, I do love sharing my photos there so hopefully this will grow more in the next year (follow here @Bec_Boop). When it comes to social media I mastered Pinterest, which I had no clue how to use at the beginning of the year and now have over 50,000 followers there (you can follow me here). 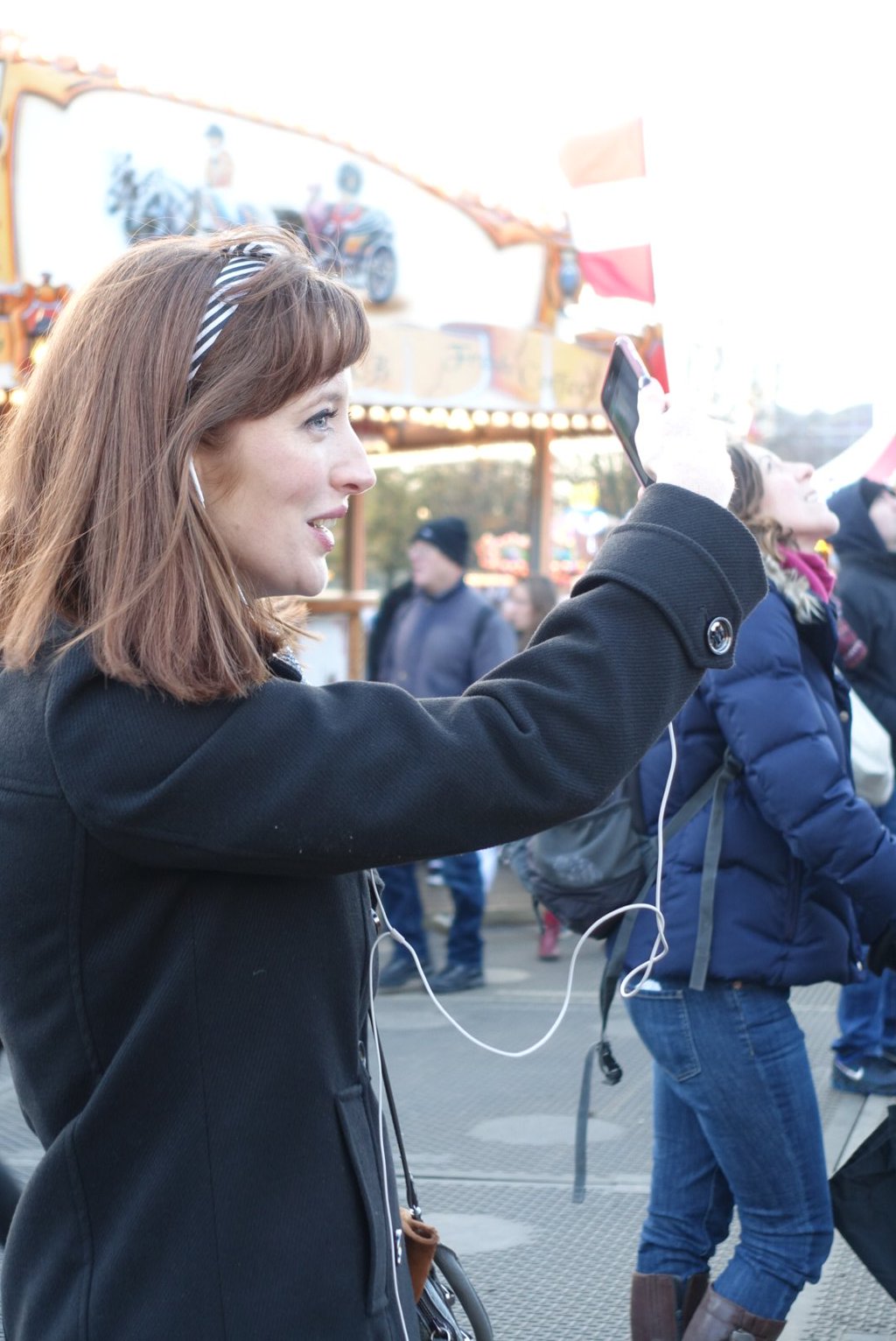 Now the part I have been looking forward to…my Periscope year in review! On the 16th of April I spotted a tweet from somebody along the lines of “Check out Periscope, it’s the next big thing.” So I downloaded the mobile app and did my first live broadcast entitled “Working on the blog!”…fast forward over 8 months later and I am now a daily broadcaster on the app with a community of over 13,000 BoopTroop followers on my Periscope channel @BoopFashionista. What I love most about this part of my year in review is that before April I had no idea that Periscope was going to come along and impact my life in so many positive ways.
I have had the best best best fun live-streaming and sharing my daily coffee scopes, event coverage, travel scopes, blogging scopes and whatever the heck I am up to on the app. I love Periscope. I love that it is real, live and that there is no editing involved. I scope every day whether I am wrapped up to the nines in a beanie, scarf and cosy coat with zero makeup on or whether I am heading out to an exciting event in London. You guys have taken the time to really get to know me and to come on this journey with me. My followers have been so amazing, kind-hearted and supportive. I try to reply to every DM and email I receive because honestly it means the world to me and I thank you from the bottom of my heart for joining my broadcasts and sending your kind words. I am so happy to be able to share my little part of this world with you all with a smile 🙂
Periscope has also allowed me to enter the world of public speaking and I was thrilled to speak at the Irish Bloggers Conference and the OMiG networking event in Ireland earlier this year. A highlight was also when I was invited as a KeyNote speaker at the first Periscope Rally event in Germany. I also took part in the first ever Scope Day where I was a featured London broadcaster for the event. I have broadcasted on the app in the following countries this year: Ireland, UK, India, Holland, Germany, France & New York. Who knows where 2016 will take us! I also thank my incredibly supportive family who have all made appearances on my broadcasts and are first to show their support at all times and listen to my excited ramblings about the latest Periscope news.

Another highlight on Periscope was being invited to exclusively broadcast the official opening of the Cheesegrater building in London by Prince William and Prince Harry on my channel. That was the biggest ‘OMG’ moment of my year.  The majority of my Periscope broadcasts are viewable on my Katch website from the year so feel free to take a look here.

I am always quite open with you guys here on BecBoop so happy to share a brief summary of how my year went outside of what you have seen here on the blog and on my social media channels. As I already mentioned, I made the move to London in February. This was difficult as I was leaving behind my family, friends and of course my dog Kingsley. It was made a little easier by the fact that I was unbelievably excited at the opportunities which London held for me. I moved over with a friend and we had a lot of fun settling into London life and I thank him for taking over the role of outfit photographer while we lived together 🙂
Personally we all have our own battles, a close family member is quite sick so it hasn’t been easy being away during this time and I ask you all to please keep this in your prayers.
Profesionally, I settled into life in the London office of my employer (I’m an accountant) and received a promotion to Manager within a few months so I am enjoying the challenges this has brought and look forward to the future working for an exciting global company in my new role.

As mentioned already I travelled to India this year, this was the furthest from home I have ever travelled and I was super nervous going there alone but I had the most amazing experience. I can’t wait to return there next year. We also brought my mam to Disneyland Paris for her birthday in October which was sooooo much fun! During the Summer I went to see my all-time fave Taylor Swift performing in London’s Hyde Park for the 1989 tour which was another highlight! 2015 has certainly kept me busy!

What will next year bring?

Who knows 🙂 I sure am excited to find out! Happy New Year everyone!

I’d love to hear from you in the comments below. Two things! Let me know your highlight from 2015 and what you would like to see more of on BecBoop in 2016. 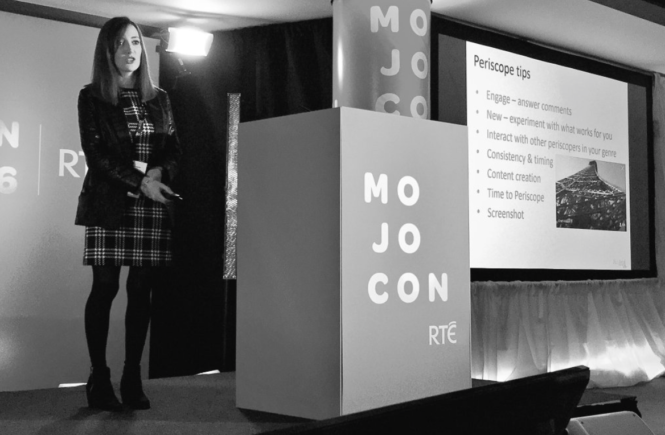 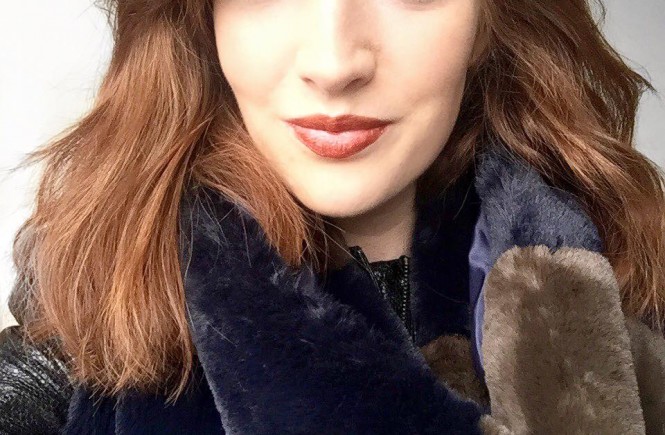 IN DEFENCE OF THE SELFIE 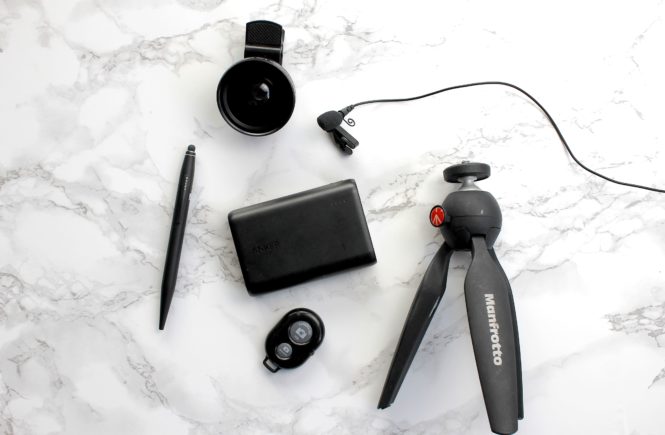