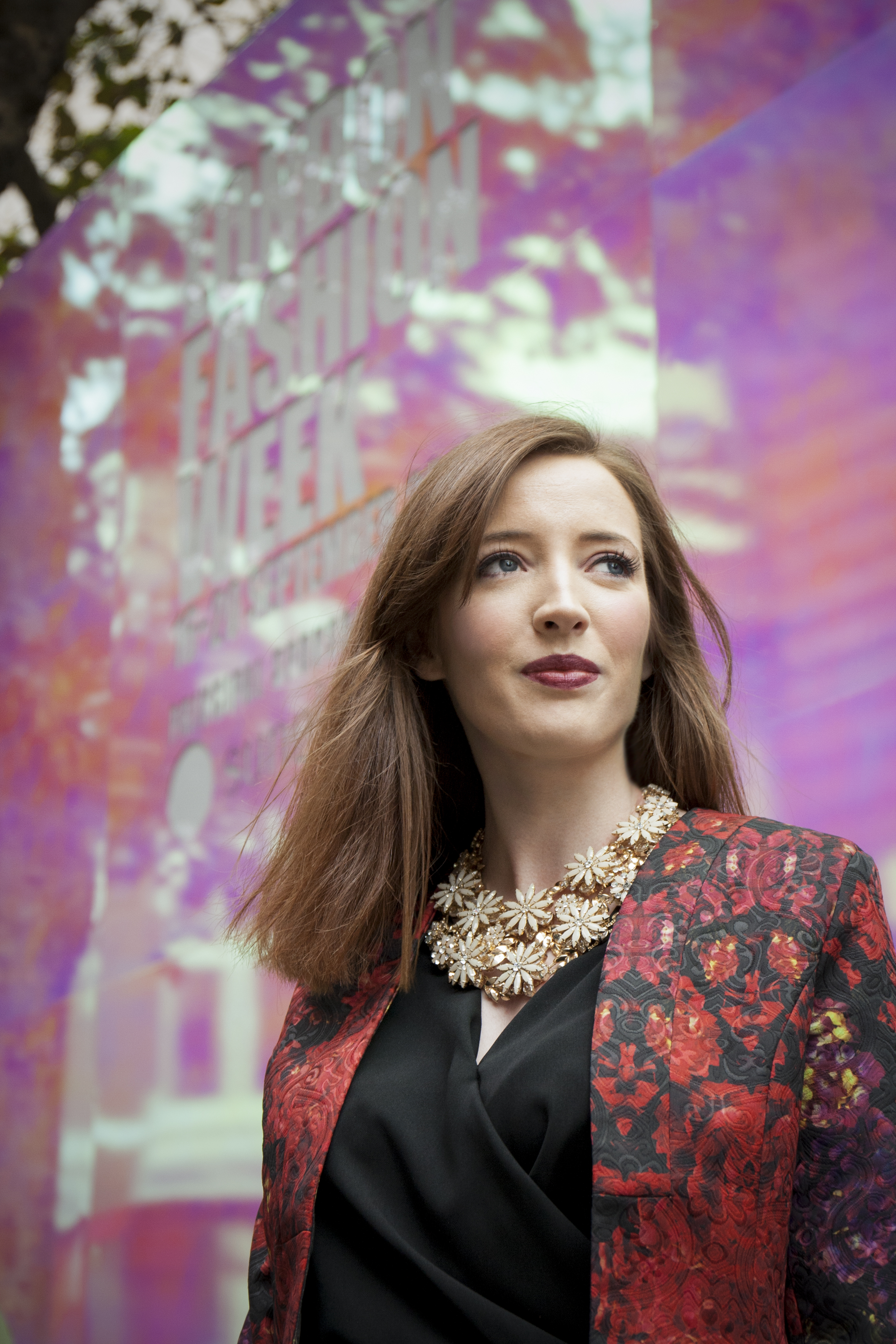 As I work Monday to Friday I usually only attend and cover LFW at the weekend. That being said, these are probably the busiest days in my calendar year as I race about from event to event, mobile journalism equipment in hand. So as I finalise my outfits for London Fashion Week AW17 here is what I got up to last season at LFW.

On the Friday night I managed to attend a show which I was eagerly awaiting – Paul Costelloe SS17. This was such a thrilling show for me, despite not being able to get a mobile signal strong enough to broadcast on Periscope. The show opened with darkness and the song Raglan Road playing. After this I had much better connectivity luck, one of the key concerns when live-streaming at London Fashion Week.

My first full day at LFW was Saturday and started with an early morning photoshoot with Alina which you can see in my London Fashion Week Style Story SS17 blog post. Following this I made my way to my first show of London Fashion Week SS17, which was Jasper Conran. I had seen the Jasper Conran AW16 show last season and could not wait to see this season’s collection. This show took place at the official LFW show space in Brewer Street Car Park and yay, I was able to share it on Periscope. We did have a little technical glitch in that the first broadcast had no sound but I have embedded both of them here so make sure to also watch the second to hear the fab country music which went alongside the collection.

Next up I made my way to the Amba hotel at Charing Cross to see the Ollari collection from New York City designer. This show was part of Fashion International showcase which features international designer collections during LFW. I loved the vibrant colours in this collection and enjoyed sharing this on Periscope too. I should also note that I was thrilled to be featured by Periscope in the app over the course of the weekend for the content I was sharing from London Fashion Week SS17. It is my favourite kind of content to create on the app and I love taking my community along with me FROW at LFW.

Following this I popped along to On|Off which is a showspace for up and coming designers at LFW. Here I was treated to Asli Polat’s latest collection. Asli Polat is a Turkish designer and my Turkish viewers on Periscope really enjoyed this one!

Next up I went along to a presentation by Judy Wu where I had a chance to interview the designer live on twitter!

My last show on Saturday was a real theatrical one, I loved it! I covered the Prophetik show at Fashion Scout live and this including some amazing live country music and a model on a horse!

Phew, now it was time to get home, refresh and get ready for day 2 at London Fashion Week live-streaming.

LIVE on #Periscope: Hello from London! On my way to #LFWhttps://t.co/uYPekpNjUA

First up, I was back to Fashion Scout to see the Cimone SS17 show and had a fab front row seat! Thanks Forward PR 🙂

At this stage I was super tired after the two days of darting from venue to venue. I should mention there are some amazing blogger/press locations set up during LFW to hang out in so this is where I can usually be found in between shows. My last show of LFW SS17 was the Belstaff presentation which included a preview of Liv Tyler’s collaboration with the brand.

So there you have it, this was my typical London Fashion Week live-streaming experience. And, I am all set to do it again this weekend for AW17! Bring it on. I am so thrilled to share my LFW experience via live-streaming. My AW17 broadcasts were viewed over 25,000 times in total and this continues to inspire me to work hard and create amazing content to share with you!

Tune in this weekend to catch my London Fashion Week live-streaming on Twitter. I recommend following me @BoopFashionista on Twitter and turning on live-video notifications so you don’t miss any of the shows!

I would love to hear from you in the comments below. Do you enjoy watching my London Fashion Week live-streaming content? Are you looking forward to AW17? Which show was your favourite?